WordPress preview post links not working? Sick of unsuccessfully trying different things you’ve found on Google like I was? Pretty much every article I read offered a different solution. Some suggested it was related to a bad theme update, others that is was related to caching, others still pointed the finger at mod rewrite/isapi rewrite rules. Eventually I gave up and just went with a preview post workaround. 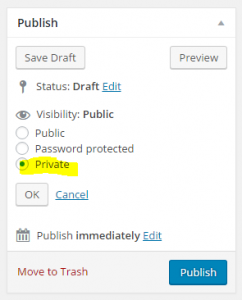 Well a quick workaround for you might be to just go ahead and publish the post but set its visibility to private. Private content is only visible when you are logged in so can be used to preview posts before publishing to everyone. Note however other editors and administrators will be able to see this content too when they are logged in, but that may be fine for your case. You can set a post to private from the right hand side of the add/edit post page as shown above. 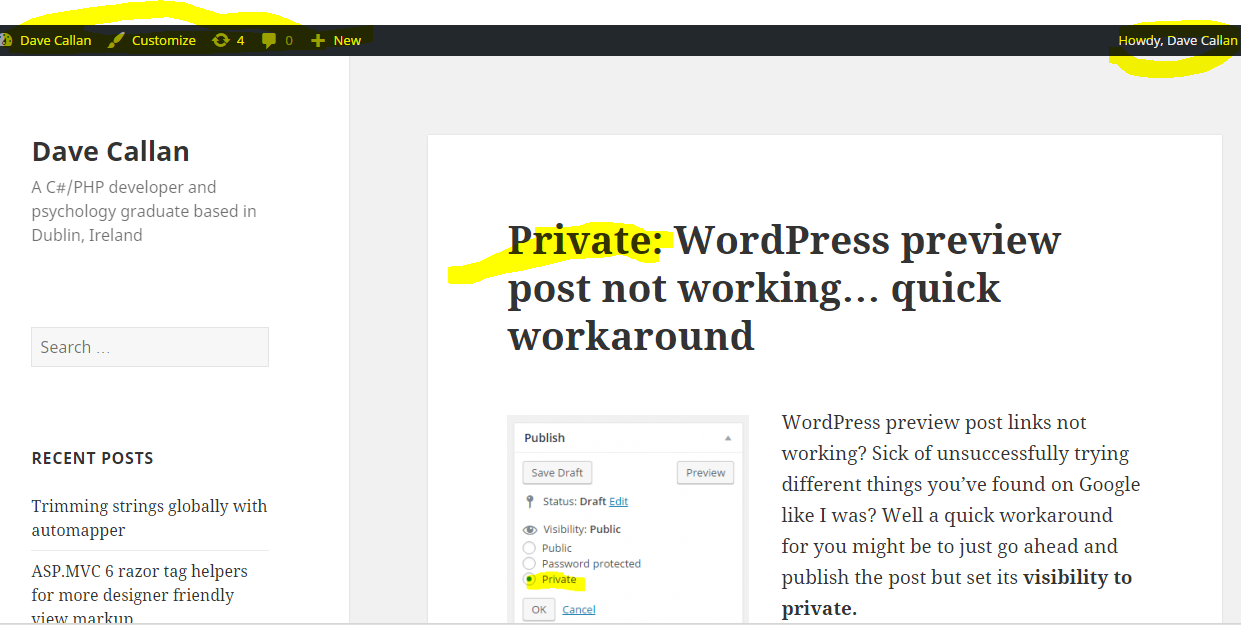 Recently working on an application based on a legacy database with a lot of char data types I was using automapper and needed to trim all non null strings for every model->viewModel mapping. I used the below code which trims ALL strings and also converts nulls to an empty string.

I’m really liking a lot of the ASP.NET 5 stuff which is coming down the line. Cross platform capabilities are cool, but more relevant and ‘exciting’ to me is the out of the box IOC container which hopefully will result in one less dependency on Ninject, CastleWindsor etc. and dynamic development which means I can change server side code, save and just refresh the browser without restarting the debug session.

On the MVC side, version 6 introduces tag helpers which I really like too. These allow us to get the same viewModel binding benefits of HTML helpers by applying data attributes to HTML tags rather than using the C# HTML helpers directly via @Html.TextBoxFor, @Html.LabelFor etc.

Markup in my opinion becomes less server side like, less ASP.NET MVC specific and more cleaner and client-side like meaning it would be easier for designers to work more fully on the views. The below example is from Dave Paquette’s introduction article on tag helpers which I link to below.

You can see that by using tag helpers we can specify things like classes, styles and other attributes (such as angular and knockout markup) in the normal HTML5 way rather than via an anonymous type. The only MVC specific part is the addition of the asp-for attribute. Matt DeKrey’s stackoverflow answer on the difference between html and tag helpers really sums up the benefits well I feel. I’m really looking forward to using razor this way, I think it lowers another barrier to working with MVC. If your preference however is to continue with HTML helpers they are still available of course.

By far the best coverage of MVC 6 tag helpers I’ve found is by Dave Paquette who has a tonne of articles about all the different tag helpers and also how you can create your own custom ones too. Start of with his Cleaner Forms using Tag Helpers in MVC6 article which is really good. Mike Brind’s Introducing TagHelpers in ASP.NET MVC 6 is another good introduction to tag helpers but also explores how they actually work under the hood.

In work, our DEV and our UAT DB environments reside on the same box, but with their own SQL instances. We prefer to store SSIS packages on disk as they are a little (actually a lot) easier to manage that way. Since our DBs are on the same box we could, when configuring SSIS packages just copy the packages to two separate file locations for DEV and UAT and alter the design time package configuration to point to DEV.dtsconfig for one and UAT.dtsconfig for the other.

Rather than this however we attempted to just have the SSIS package in one location and override the default .dtsconfig file which was defined at design time by passing in the the environment specific .dtsconfig as part of the two (DEV & UAT) SQL agent jobs set-up to execute the package on schedule.  This can be done from the configurations tab in the job properties.

We expected the package to take its settings from UAT.dtsConfig as that was what was defined in the job but as we found this was not the case. This is because as of SQL 2008 SSIS packages load configurations in the following order:

which meant the .dtsConfig specified in design time configuration was used. According to Behaviour Changes to Integration Services Features in SQL Server 2008 R2 on the MSDN site one can use /set to change design time settings but not the location of settings.

To get the .dtsConfig specified in the job to be the effective one, we needed to disable package configurations in design time. Not delete the existing one, but just disable it. After that the config file specified in the SQL Agent job was used. 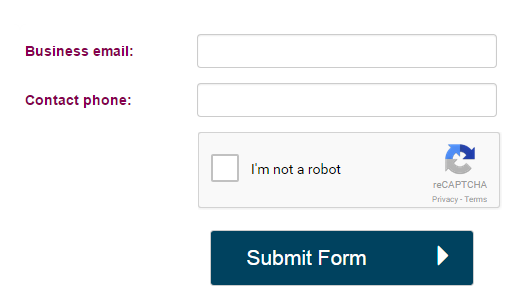