I recently had a need to test a migration script which converted product IDs from one ERP to those of another in a .net system local DB and needed a way to run the script and continuously and very quickly restore the original state of the DB.

I used the following TSQL to quickly restore:

The juicy bit is obviously the restore database command, however you will likely need to kill all processes to avoid getting an ‘Exclusive access could not be obtained because the database is in use‘ type of message. There are a couple of ways of doing this and one of these is to set the DB offline and then immediately bring it back online again just before we attempt the restore.

Just installed UpdraftPlus to schedule backups of all my WordPress related content including of course the database but also the images, themes, plugins etc.

I’ve just scheduled backups to come to my email but you are also able to send them to Google Drive, Dropbox and a couple of other cloud storage services too, which is pretty sweet I think.

It’s free (although there is a premium version too) and packed with features so if your looking to implement backups on a schedule to give yourself piece of mind I’d definitely recommend installing it. 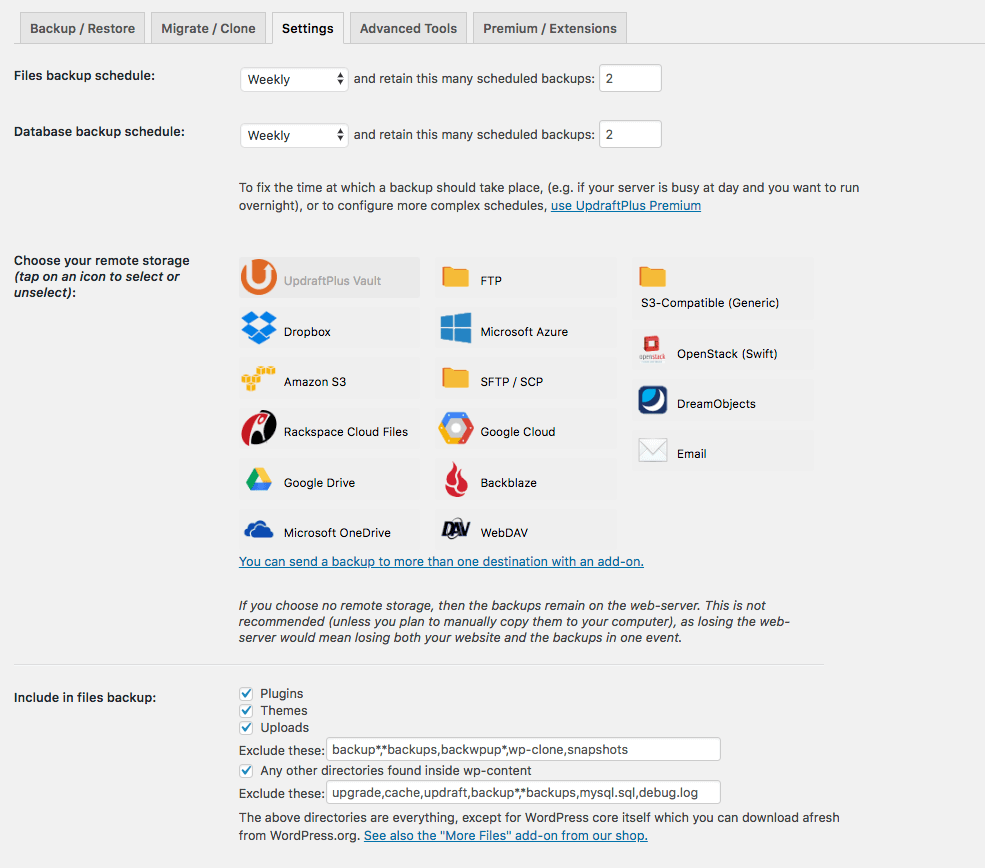 If you want to have a client-wins or last in wins approach to concurrency management you don’t have to do anything, the last user to save their changes will simply cause an overwrite of all previous changes. This is acceptable in many cases. You might however want to notify the user of the most recent save (attempted) that another user has saved changes to a record since they loaded the record edit page and thus their data is out of date and their update hasn’t been saved.  This is refereed to as a store wins approach. Implementing this in Entity Framework is relatively easy, you need to:

A common way to detect concurrency violations and the one recommended by Tom Dykstra is to use the rowversion data type approach. This data type is essentially a version stamp for a particular DB record. With this information, at the point of update (update or delete) client code (in this case entity framework) restricts the update or delete query with a where clause containing the original value of the rowversion field. If another user has edited the row, the where clause won’t match, 0 records will be update and Entity Framework will throw an exception. As noted in Tom’s article, to indicate to Entity Framework which field to use as the rowversion field you can annotate the relevant field with the [TimeStamp] annotation or use the fluent API.

This column of course must be manually created in the DB or migrated into the DB as with entity frameworks code first approach. Although for the purpose of the demo, Tom’s article has the C# property in the object class itself, it is often better to use an entity base class which can contain implementation fields such as RowVersion, DateCreated and DateModified. While doing this is still technically ‘polluting’ the domain model, it keeps things a little bit cleaner and is a good solution for most. Remember that you will need to post back the value of the RowVersion field using a hidden field for Entity Framework to work with it: @Html.HiddenFor(model => model.RowVersion).

You can see from the above trimmed down excerpt from Tom Dykstra’s official MS article (Handling Concurrency with the Entity Framework 6 in an ASP.NET MVC 5 Application) that he sends the current DB values back to the GUI so the user can see what the previous user changed the values to. Since the rowversion which gets sent back to the view is updated with the DB rowversion value the user can now review the current values and then decide to keep his or her changes without causing another concurrency exception. Although this is a nice usability touch, it can be expensive to program all the explicit comparisons between the DB values and values from the GUI, particularly in large applications with a lot of edit pages. An alternative approach might be to simply reload the edit page, discard attempted updates and put a message informing (using TempData) the user that their changes didn’t go through. Of course the user has to redo their changes in this instance, but this approach could be fine if it is only rare that concurrency issues happen.

To keep things DRY you could put this code in a base controller method. If a concurrency exception is thrown in a delete controller action after a previous user has edited something, you can use a similar technique and redirect to the edit page and inform them they need to try and delete again. On the other hand if a user attempts to delete an already deleted record, I don’t think you need to display anything concurrency related on the GUI as the user has got what they wanted, just a regular confirmation perhaps.

If your hosting your site on a Blacknight shared windows hosting account, you’ll likely have either ISAPI Rewrite 2 or ISAPI Rewrite 3 installed depending on which particular box you are on. The machine I was on was based on ISAPI Rewrite 2 so rewrite directives had to be placed in httpd.ini. My WordPress install was in the root so I created a httpd.ini file in there and added the following which got custom permalinks working for me.

If your using version 3 of ISAPI Rewrite you should just be able to manually create and use a .htaccess file like on Unix. Placing the following code in your .htaccess file should do the trick, although I’ve not confirmed this as I’m on version 2.

Right clicking on a web project or a WCF project (others too I’m sure) in Visual Studio presents you with a publish option which when run basically drops all files needed to deploy your project into a single folder. The publish action will use any web transform files so settings included in the to be deployed web.config are settings relevant to whatever configuration was selected when you ran the publish command.

For smaller deployments this might be fine, but if you have multiple projects and/or you need to do some pre or post work (such as FTP or IIS related) your likely to want to put everything you need into a single MSBuild script so the deployment is repeatable, quicker and safer.

If you have Visual Studio 2010 installed you can get the same functionality that Visual Studio provides through the GUI via MSBuild with a snippet like following:

In this instance I’m asking MSBuild to publish a project called MSBuildExamples.Web to a folder called Production in the location where the build script is being called from. Depending on the publish options contained within MSBuildExamples.Web.csproj the files in the generated Production folder may contain raw *.cs files and *.dlls or just the *.dlls needed to run the project.

The most important part is the targets attribute which is highlighted above. This uses a target called PipelinePreDeployCopyAllFilesToOneFolder which is a Visual Studio 2010 (and 2012 presumably) target, not a built in MSBuild one. The target is imported in MSBuildExamples.Web.csproj with the following line:

which Visual Studio will automatically add when you create either a Web or WCF project. Running the PipelinePreDeployCopyAllFilesToOneFolder task against a project in MSBuild does exactly the same thing as running publish against the same project in the Visual Studio GUI.